Jack still has a bit of a wet cough, but seems to be feeling fine. Just working its way through I guess.

Matt and Jack came into Dresden this morning and we spent the day around town together.

Not much to update you on other than Jack having fun rolling around on the couches at the cafe and again dishing out the smiles. I just peeked at him in his crib after just putting him to bed and he even just smiled in his sleep.

It seems to me that he’s beginning to show more expression. He’s been trying out a bunch of smiles. 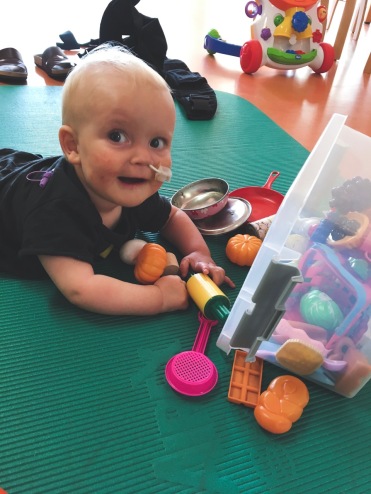 When he gets tired Matt and I notice that he has a harder time holding himself up and steady, he sort of becomes floppy for lack of a better word. We’re both guessing as he builds his strength that will get better. He’s already able to hold himself up much better if I have him on my hip but can’t really hold himself up in a sitting position or even pull himself more upright in the stroller. Those are a couple milestones we can work towards.

Matt’s getting together with friends tonight and tomorrow Jack and I will head back into town to hang with Matt.

Today marks one year since Jack went into cardiac arrest. Let’s just say I’m looking forward to what the next 12 months hold for this amazing little fighter we call our son. 🦁♥️ new post is up on the blog (link in bio 👆🏻)
Results are in! We’ve heard back about Jack’s full exome sequencing. Read our latest post to learn more and hear about Jack’s current therapy program (link in bio 👆🏻). #jackthelionheart #exomesequencing #thatdimpletho
Round 2 of genetic testing started today. This guy had a blood draw today and handled it like a champ. His sticker is a cat meme that says “You think you’re tough? I’m the toughest, I got a shot.” #jackthelionheart
Yesterday marked SIX months since Jack went into cardiac arrest. Today he took multiple steps along a couch, a water table and in the bath (while holding on). He also threw a lot of food on the floor. 🤔💥 #throwingisfun #jackthelionheart (new post with more of an update is up on the blog- link in bio)