Time off from the center is nice. Real nice. It allows us a a sense of normalcy to be able to laze around the apartment for brunch and let Jack roll around in our bed. Or send mom for a walk with him so Matt and I can sneak in a beer by the river.

The hardest part of the weekend off is saying goodbye each night as one of us heads back out to Kreischa with Jack while the other one stays behind. We’re both really looking forward to the day where we get to spend our first night together as a family. (Including Rog!! We miss him!)

Jack had a really good weekend though: we saw a lot more movement in his legs while in tummy time. He tried to draw his left leg up more than ever before and a number of times even tried to tuck both legs up to attempt to push himself forward. He’s still not putting it all together yet- he’ll tuck his legs up but then forget to move his arms. But it’s a definite improvement. And it’s fun to watch him roll around. He’s talking a ton- as in All. Day. Long. And even imitating a few things we say- “all done” for example. We’re starting to notice his pincer grasp getting better or noticing he’s sometimes trying for that anyways. He still tries to grasp things with an outward flexion of his hand so that will be something to work on in the coming weeks and months. He’s able to sit up with a little less support but still not on his own.

Step by step, getting stronger.

He was also definitely wanting solid food so we indulged: scrambled egg, tiny pieces of bread with hummus, tiny pieces of chicken and his practice crackers (the melting baby kind). Plus he made some big strides with the amount he was drinking this weekend- practically doubling it. A good thing because it was 29 degrees today! 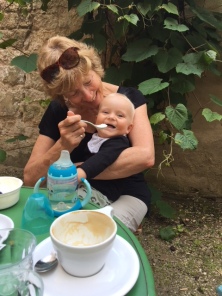