We had a really good chat with the head doctor of our ward today. He spoke about his meetings with the therapists to discuss Jack’s progress and ultimately how our move home might affect that progress.

The Cole’s notes version: they said he’s nearly caught up to his age range for cognition, and eating. He still has to work on drinking and fine motor but that should come with time. The biggest deficit they’re now seeing, or the one area that he isn’t progressing as quickly, is his gross motor ability. Specifically his core strength, arms and legs strength and sensory feelings in his feet. More deficits are seen on his left side compared to his right. They’ve placed him at around a 6 month old’s development for gross motor skills.

So ultimately the opinion of the team at Kreischa is that there is no risk in Jack having a gap in treatment for a week or two in the transition home if needed and that our primary focus in therapy moving forward should be on gross motor and strengthening as well as sensory motor skills. This doctor believes that in all other areas Jack will likely continue to progress well just with time alone.

He did say again how impressed they were with us and our commitment to Jack’s therapy as well as how impressive and fast Jack’s progress has been in general.

We have until Friday to decide if we wish to renew after June 8th for a couple more weeks or whether we wish to be discharged at that date. In the meantime, the doctor will begin to prepare our report so we can have it translated for the doctors in Canada.

Jack had good physio and music therapy sessions this morning and then we did some “parent therapy” in the park.

Mom has some video evidence. Seen on Instagram under the highlight reel titled “Play. let’s have fun!”. 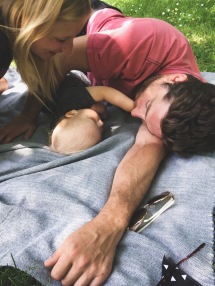